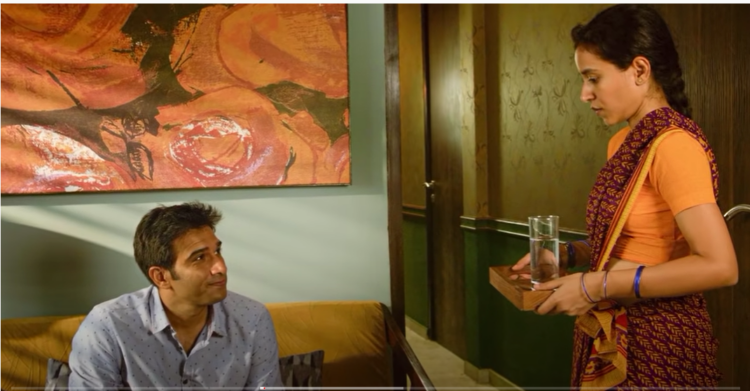 When I watch a movie, I always have my third design eye wandering around and catching details of the movie set. Especially if the movie is set indoors, by the end of the film, I would have not just critiqued the movie, but also the movie set design, and formed a solid opinion of it. Are you that kind of movie watcher?

When I watched Sir, I was intrigued by the story line – the unlikely and still-stigmatized romance between house help and employer. And of course, I was blown away by the sets, mainly because unlike most sets, this one actually transformed from a shell of a 23rd floor apartment to a gorgeous, well-decorated home that felt authentic, real.

And that’s why I hesitantly connected with Tillotama Shome, with absolutely no hope that she would actually respond. But she did. And things moved very fast, as she put me in touch with the director of the movie Rohena Gera and the production designer of the movie Parul Sondh. They were quick to help me info, images and the background of the set!

And I am so happy to present the back story of the sets here!

The first glimpse of the apartment, and indeed the location of many poignant scenes between Ashwin and Ratna

The entryway is narrow yet well-appointed with a lovely console table and concealed storage.

The wall paper and the tones of green and beige set the tone for the colour scheme of the rest of the apartment. Let’s go over the complete set/ apartment from the Production Designer, Parul Sondhe’s perspective to get some insights into what goes on in the background of set designing.

From bare shell to decorated abode: The before and after pictures, ‘Sir’ movie set design

Says the movie’s production designer Parul Sondh, “The structure was there, not the decor or design. As you can see, it’s a bare, white shell. The fact that it’s a real location was also extremely restrictive. It’s always easier to make a set – dimensions are in control as is the structural design and one isn’t restricted with an existing structure. Compare that to a real location, where a lot of work goes in to make it the way that best suits the narrative! Also, when we construct in a studio, our work plan is according to the design whereas in a real location, we have to fit our design into the shell. It’s challenging but fun. Also, there exists no studio in Bombay on the 23rd floor with that view of the city – which is imperative for the narrative.”

She adds, “This entire space design was executed in a week’s time. I came on board this project, 20 days before the shoot – shortest prep ever for me on a long format. The fun part is maybe that Rohena and I were in different countries during the prep. I was in Thailand – I did my mood boards, set design from there (my very able assistant, Malhar was in Bombay and we worked together via WhatsApp etc – there was no zoom yet, it was 2017 Feb) and Rohena was in Bombay.

The styling and design of the 23rd floor apartment

A week is an incredibly short time to execute a home’s interiors! Here are more inputs from Parul about the styling and design.

A lot of furniture was designed and built as well – the dining table/ dining chairs, coffee tables – in the drawing/ dining/bedroom, study shelves and all the partitions along with the extension in the kitchen and everything was re- upholstered.

Parul lets us in on some cinema set design secrets.

In Cinema, unlike residential interior design, thought has to be also given to the camera angles – how can the space be more cinematic, how can there be more viewpoints of the same place- so as to give dynamic framing and not repetitive. It’s a cinematic art form and what looks good to the eye can look terrible on camera.

I love wallpapers and think it breaks the monotony of a single colour and for the corridor, which is an often seen/used space in the film and a connection between the worlds, I went for brown green patterned paper- it’s graceful, subdued and makes the corridor a separate entity.

This is not supposed to be Ashwin’s personal space. It’s a family apartment where he lives. It’s rich but impersonal, not ‘his pad’. The decoration is eclectic, leaning more towards old school deco.

In cinema, production design is not just interior decoration or/ and it’s not supposed to be only beautiful!

It needs to flesh out the the narrative spatially – when you enter Ashwin’s apartment – the space design needs to reflect the cagey-ness he feels in general despite everything being so rich and plush. For the same reason, I went for blinds rather than curtains, partitions instead of openness. There is more linearity, straight lines in the overall furniture form / space design as well.

Ratna lives there but there is always a barrier before she enters ‘their’ world – the partitions also serve that purpose.

My sincere thanks to Parul Sondh and Rohena Gera, and especially to Tillotama Shome for making this possible. And to Vivek Gomber – for playing the brave role.

After you read this, do go back and watch the movie again. I did, and the chat with Parul certainly threw new light- it was like taking a master class on set designing 🙂

I loved the concept of the movie, I loved the sets and I loved the acting. However, there was one area that left me disappointed.

On a personal note, and one that resonates with the opinions of a few other friends. I wish there were more scenes devoted to the development of the romance. While the concept was beautiful and daring, we would have loved to see a more “Equal” progression of the romance – it did seem rather male dominated – a kind of he liked her, so she should be grateful and like him back, kind of one-sided and not too convincing storyline. It came across as ‘gently evasive’ of a much-needed but very-neglected aspect of this movie. Having watched the actors’ interviews at Cannes, I know there was a great deal of effort going in from their side. It’s not them, but the story line itself that I wish had devoted so much more to the “buildup”.

Though this is a blog post dedicated to the set design, I had to say this too because it has been at the back of my mind a lot, and the set allowed for so much more!

Read more of this blog

If you liked this piece on movie set designs, you might enjoy this blog post I wrote, featuring set designer Niyoti Upadhyaye and her designs

A profile of Rahul Alvares, author and nature enthusiast

Pagdandi, one of few Indian book stores, and my fav hangout spot in Pune