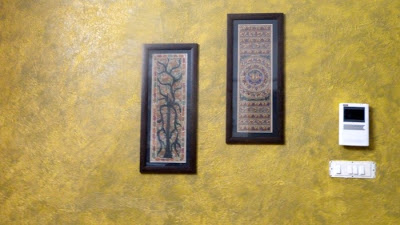 One fine day, I decided to make my way through my man’s heart, not through his stomach but through a visual feast with some elements of surprise thrown in for that added zing. A surprise wall makeover was on my mind. The Asian Paints Royale Play commercial with Saify the telly also had something do with this. The grand plan of putting things into action was drawn.

Ensuring all things happening hush-hush is an arduous task given the fact S is an architect with no fixed work schedule. I made sure that I interacted with Asian Paint representatives to choose the texture and color during lunch hours as he is rarely home at this time slot. I chose a wall in the study opposite my working desk. Now, I had to choose a texture and color that blends well with the rest of the décor and still look good in case I changed the furnishing in the near future. So, I settled for a crinkled texture that gives the feel of handmade paper…..and the color combo was yellow and olive to give shades of mustard.

Finally, I chose a day when hubby was crammed with meetings. As the D-day arrived, I was feeling nervous coz I just didn’t want to go wrong. Two reasons – One-choosing and suggesting textures and colors for others is one thing, doing the same for your own house is another. Two-pleasing a man who lives and breathes colors everyday would be an arduous task.

On the chosen day the ‘Surprise My Spouse’ team arrived just in time after hubby left. The guys prepared the textured wall and painted it with a beautiful shade of yellow and let it dry for a couple of hours.

The final step was to brush olive paint randomly and sponge it to give a shaded effect. Oh, I must mention that my heart skipped a beat when I saw the painters mixing the olive shade coz I hadn’t imagined that color in my mental makeover and this continued even after they finished the makeover.

Now, came the much anticipated time… S arrived well ahead of time! Luckily, the guys had just completed the work. He was surprised to see a couple of strange men at work. The kids were jumping with excitement to see his reaction. As he walked upstairs and took a look at the makeover, he just smiled  no surprise reactions! For a man who shows very little emotions, some sort of mild reaction was expected but no reaction, definitely not! This got me worried of course….

Hmm, I guess the bare textured wall was not so impressive after all. I remember watching our own Saify and Soha gleaming after they put up the pictures on the textured wall in the ad. The Madhubani paintings that were put away before the painting started did the trick! The wall looked so different once they were put up. It’s like giving you a blank painted canvas to play around with… I never thought a simple makeover could change the whole dimension of the room.. The room definitely looked brighter and cheerful post makeover.

Now, he opened up and said he loved the texture and of course, the surprise makeover! Who says the only way to a man’s heart is through his stomach? It can happen with a makeover too, don’t you agree? 🙂